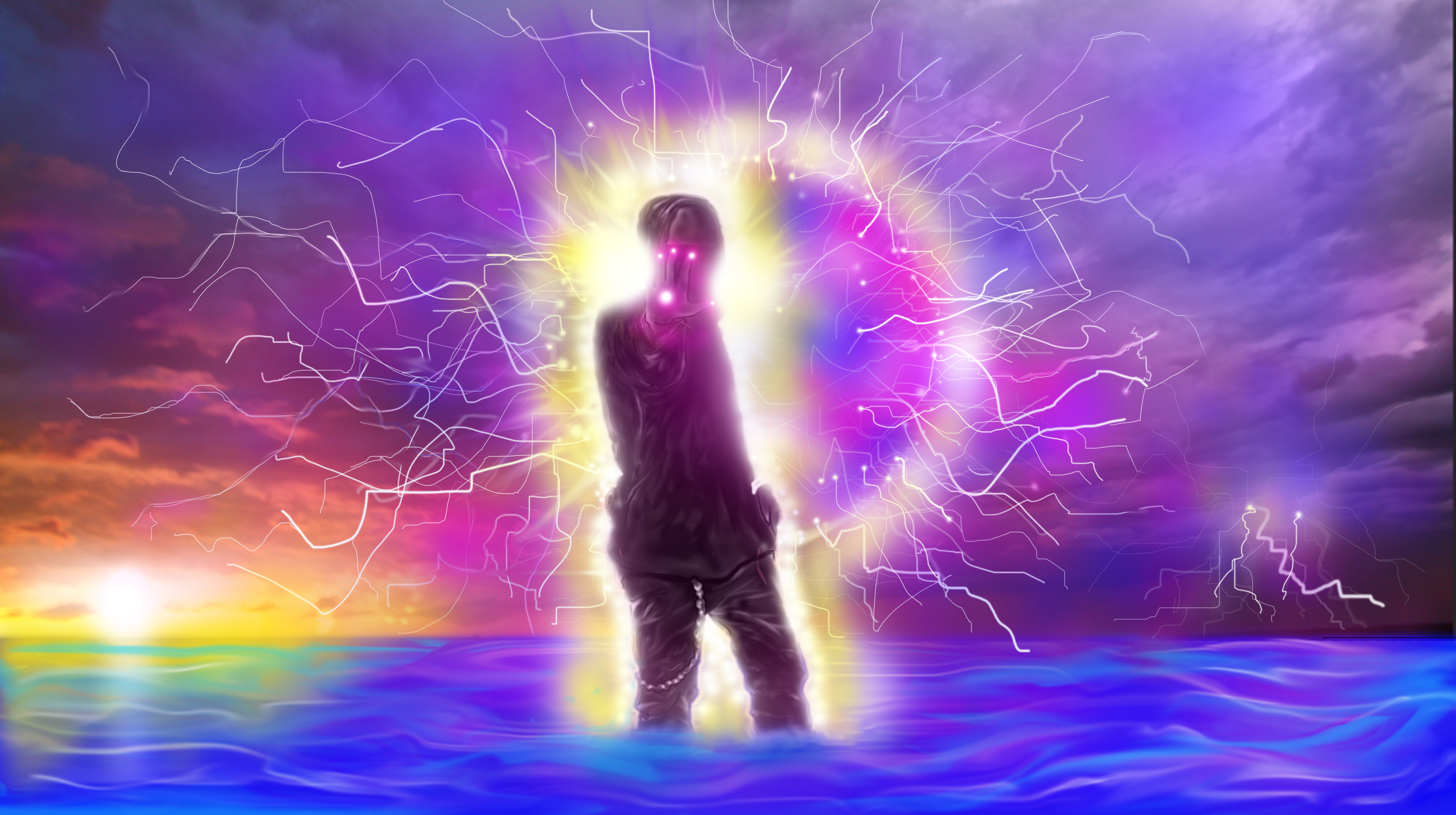 No matter what, each person is on their own. This is not a negative idea because it gives us a chance to perfect ourselves. We share parts of our lives and journeys with one another, but, each is responsible for their own development and destination. How many of us are out there right now trying to shoulder the weight of the world and all of the problems thereof when internally we continue to ignore our own personal malfunctions? Neglecting ourselves in every respect. By this I mean self-reflection, not self-absorption. Self Reflection is powerful because it allows you to look at all of your personal attributes that have led you to self destructive paths, be it psychological, physiological, or “spiritual.” It allows you to see how much you willingly reject the beauty around you in order to focus on the negativity you choose to cultivate within yourself. I think many would be surprised at how much mankind immerses itself with external problems, social screw-ups, and global issues just so they never have to see the reflection looking at themselves in the mirror. Sometimes, it isn’t a “conscious” decision...more like a routine that grows. And just to be clear, I do not claim lack of guilt.


Making the world’s problems your own might not be any sort of a solution at all, especially when each person is responsible for themselves. If you constantly dwell and immerse yourself in plights and worlds where torment and pain occupy your every thought, then you willingly soak yourself in the worst this world has to offer and will find yourself depressed and helpless. You’re doing it to YOURSELF. Let me repeat that...”You’re doing it to YOURSELF.”


You aren’t here to solve the world’s problems, as that will eventually solve itself...either through a collective upwards thrust of positivism and love, or through the destruction of humanity because of repeated collective negative and self-serving types of practices. The Universe had things figured out long before any of us came along. Either way, the world was here before you and it will be here long after you’re gone...after-all, it is the true organism, it is the true “intelligence.” You’re just occupying space the same way mold or moss does when it grows upon something greater.


You’re here to correct your own negative preferences and embrace as much love as you can give and receive. If you choose to not do this, then you are doing yourself a grave disservice. How can you possibly take on every decision, dream, preference, or personal ideology that another chooses to make, let alone 7 billion of them? How can you rally millions into a cause when each person has their own idea of what that “cause” may entail? Why did the “Occupy Movement” fail? Because there was no unifying cause that brought people to stand as “one.” There wasn’t any singular ideology that was strong enough for people to agree upon and most westerners are not disciplined enough to fight through discomfort or adversity. They’re soft and have been accustomed to an unrealistic standard of living provided by the non-stop barraging of war all over the planet by their “overlords” to attain resources. Quite frankly, most of those in the “Occupy Movement” were fighting to not have to pay student loans and could have cared less about how the bankers rigged the state of the economy to create never-ending wars and disparity among the people. If we are truly the people we claim to be, there wouldn’t be a single homeless person existing on our home soil, let alone anywhere else.


So far, this world has found only one unifying factor (FEAR) that consistently rallies the masses into any sort of collective action which is usually based upon mankind’s most favorite archaic and adored pass-time...war (fight/flight, reptilian mind response). And I believe that this is a tell-tale sign of the “nature” of the world that we willingly and collectively choose to reside in...after-all, the greatest form of entertainment that is consumed on this planet is known as “horror.” Otherwise, it would be quite easy for society to see the pattern that is routinely used to justify the eradication of millions of it’s own sons, daughters, and brethren. As it turns out, the word “terrorism” is quite the trigger for the majority of people on this planet...it certainly seems to be preferred over the word “love.” The word “terrorism” allows us to revel in the idea of superiority and morality while at the same time, mirroring our favorite form of preferred entertainment, horror. Blood and guts. If we truly were against such things, we wouldn’t be flying flags or aligning ourselves with certain factions and groups of people while willingly excluding and vilifying others. This silliness allows us to justify our need to have an enemy, or, something to fight against...people certainly have a need to feel self-important. But, this is no different than anything that has ever existed before it, and this cycle will continue to run it’s course until people choose to embrace love from the inside. Work on yourself and you’ll create the environment of your choosing. Continue to externalize everything while pointing fingers outward and this negative process will continue without interruption.


In my personal opinion, I have worked hard and long for decades as a champion of mankind attempting to “protect” people whom I believed were merely “ignorant and innocent” regarding the nature of the hidden world around them. Until...I came into a glaring realization. This situation is 100% self-inflicted and exists because of our choices. If our external worlds are a mirror reflection of our internal desires, then this absolutely explains why war has existed through every year of every century that mankind has walked the planet. Always remember, in the Western world, military service is VOLUNTARY. Many souls are here to service themselves and to remain oblivious to their own malfunctions. The reason why the world has so many problems is because this world has 7 billion people all living personal lives that are primarily based upon self absorption, self service, and over-consumption. Our internal conflicts reflect in our outer environments.


This world was never meant to “heal” or to be a place where people take care of one another. It was created as a means to profile infant souls that tend to run negative, self-defeating cycles like machines until they have matured enough to join the remainder of the Universe. This is why the planet itself runs in carefully designed patterns and cycles of which those “in charge” manipulate for personal gain. This is also why the planet has a very developed quarantine system known as “gravity,” as I have discussed in many other write-ups and videos. It is quite needed as it keeps our behaviors from reverberating outward and affecting the general functions of an otherwise peaceful universe.


In of itself, Facebook and other social networking sites have grown into a system of which develops the ego rather than a place where information or knowledge is passed back and forth freely. This is why selfies and memes have become more popular than actual communication. At their finger tips, mankind has technology more powerful than the computers that supposedly sent the space shuttle to the moon, and the most we have learned to do with it is take photos of ourselves to post to networking sites for the specific approval and consumption of others. The irony about memes are the fact that people have willingly become liaisons for advertisers and major corporations who data mine for information and sales. Yes, even the supposedly “conscious” memes that people pass back and forth are nearly all driven by major corporations who use our thoughts and wishes as leverage for profits. For them, it’s cool to pass thought templates along that entertain the idea of “peace and love” just as long as your actions remain the opposite. As a result of all this, I have noticed that there are some people who crank out memes on facebook as if they were designed to be assembly lines for their favorite advertisers, and, they even do it for free without an ounce of compensation. They control all information flow including every outlet that mankind uses for the purposes of “ascension,” or “knowledge.” Ironically, As opposed to sharing anything original such as thoughts or information that has been created by the common man, they provide a pre-fabricated thought template that eliminates any need for critical thought, analysis, or the human creative process. And, mankind seems to know which is which. When people create their own memes to post and share on social networking sites, they are not shared nearly as much as when a corporate meme is presented...even if they look nearly identical, side by side. I know this because I have personally tested it. As a result, eventually, the majority of art produced by humanity will become pictures with clever catch-phrases meant to serve as a thought template for the mass. A successful way to create a singular thought stream without deviation or improvisation. This is what our world has willingly become.


The best thing that one could ever do for themselves is to focus on that which TRULY makes them happy. If one consistently focuses on the misery of the world, then by default, they will bring said misery upon themselves. If you want to see external changes created within the world, then my suggestion is to begin those changes within yourself. I am not saying ANYTHING new whatsoever...I am just re-articulating it in a way that will hopefully trigger people into action.